skip to main | skip to sidebar

this is offset article (www.thisisoffset.co.uk) 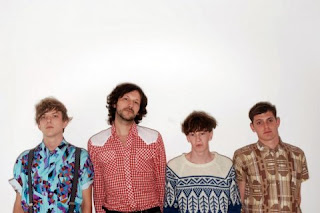 The wonderful Ex.Lion Tamers - fed up with Wire comparisons at every turn - are now called Wild Palms.

Here’s what Lou from the band had to say about the name change:

“Every interview or review mentioned Wire straight away, mainly because of lazy journalism. We’re not even that big Wire fans, we just used Ex.Lion Tamers as a name for our first practice about a year ago because it was the album I was listening to at that moment. We had a different line-up then with another bassist and Gareth playing guitar with Darrell. We’ve just never done anything about it.

“With a name like ELT you will never carve out your own space, it’s got too much baggage; people see and hear Wire before you’ve played a note. I don’t think a single one of us owns a Wire album, they’re definitely not a remarkable influence.

“We spoke to Colin Newman (from Wire) about recording a single; he thought the same thing about the name ELT as we did. We wouldn’t have have longevity - and if we were serious about what we were doing we should scrap it. The name completely compromised our music which is always the most important thing to us. promoters didn’t really want us to do it because of press and stuff but that stuffs nowhere near as important as feeling you have authorship over your own art.

“We changed it to Wild Palms after a couple of weeks of coming up with a load of pretty terrible names. You can’t force it, we wanted a name that portrayed something natural, primitive, visceral and couldn’t come up with anything. At the time I was reading The Sound and the Fury by William Faulkner. When I finished it I looked at his back catalogue and I saw he’d wrote a novel called The Wild Palms; it seemed right straight away.

“It’s a blend of two stories, a love story and a river story, entitled “Wild Palms” and “Old Man”. The stories alternate throughout the book; “Wild Palms” focussing on an ill-fated relationship, and “Old Man” in which a “tall convict” battles the great Mississippi River Flood of 1927 to save a pregnant woman from the raging flood waters. The two separate tales of a doomed love affair and the convict’s stoic perseverance against devastating natural forces compliment each other in their attitudes towards relationships, destruction and hardship. Faulkner used the dry palms clashing with the dark wind as metaphor for utter waste, sterility and destruction. However, it also brings to mind beaches and hands. which are both good…!

“Kind of went off on one there!”

Well there you go! As one of the best new guitar bands we have heard in a long time, with a distinctive sound all to their own, it makes sense to me!

The band are playing live at God Don’t Like It on March 3rd at Old Blue Last, on a cracking line-up including Offset favorites R O M A N C E and The Neat in support. DJ’s are GDLI, Joe Eakins and our very own Offset Festival DJ’s. And it’s free entry!

They are also supporting The Maccabees in Kingston on the 26th of February.